Push starting, also known as “bump starting” a car or motorcycle is a way of getting the vehicle started when either your starter motor or battery have given up the ghost. It consists of getting a vehicle into it’s running state, pushing it to get some momentum, and engaging the transmission, to start the engine spinning. Be aware that to push start a car you need to have a manual transmission, and trying to push start an automatic vehicle will either fail to start it, or possibly damage the transmission. You should also avoid bump starting a vehicle with a catalytic converter as unburned fuel mixture in the exhaust may cause it harm. It can still be done in a pinch though. Though it may be tempting if you’re alone and on a hill, it’s a really bad idea to push the car down the hill then jump in to bump start. People have accidentally run themselves over trying this. It’s best to find someone to help. 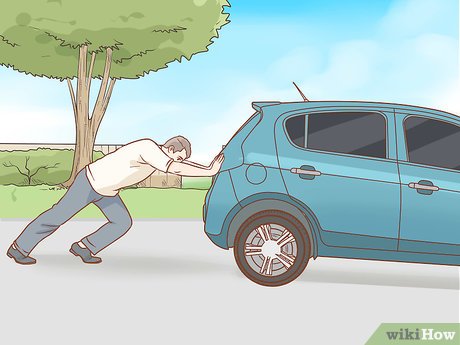 The first step in push starting a car is getting it in a state where it’s ready to run. This usually just means disengaging the parking brake, having the key in the on or running position, and having the driver in place. This makes it so once the momentum of the pusher(s) is transfered to the engine it will be ready to use that momentum to start up and run.

Put the car in second gear (possibly higher depending on how fast you’re rolling when you engage, press in the clutch pedal, and push the car until you get as much speed going as possible. It’s best to have a long stretch to go down and nothing to worry about running into, but depending on how many pushers you have and how light the car is you can get away with some fairly short runs. Just remember that the more momentum you can build up the more likely your bump start will be successful

Now that you’re rolling at a good clip, your pushers should let the car roll on, and the driver should engage the transmission. You should engage in 2nd gear, since engaging into 1st gear would winf up the engine’s RPMs fast enough that it may cause damage. I’ve also seen people starting by push starting in reverse and engaging in reverse, though 2nd gear pushing forward is still your best bet. The idea is that whatever speed the car is going in, you should engage the engine in the gear that you would normally operate the car in at that speed.

Make sure to give it some gas as you engage or you’ll likely stall the engine out. If it stalls anyway try again and see if you can get a couple more people to help push. Make sure you figure out what’s causing your starting problem ASAP so you won’t be push starting any more. As mentioned in the intro, you can also push start any motorcycle with a clutched transmission. This is very useful since motorcycle batteries carry less charge and they’re usually small enough for the driver to push and engage the motor themselves.