Home / General / Tips for Night Driving, Must follow Rules!
Traffic death rates are three times greater at night than during the day, yet many of us are unaware of night driving’s special hazards or don’t know effective ways to deal with them.
Driving at night is more dangerous than during the day. One of the obvious reasons is darkness. Ninety percent of a driver’s reaction depends on vision, and vision is severely limited at night. Depth perception, color recognition and peripheral vision are compromised after sundown.
Fatigue also adds to the danger of night driving. Drowsiness makes driving more difficult by dulling concentration and slowing reaction time.

Alcohol is the single most significant factor in fatal traffic crashes, playing a part in more than half of all motor vehicle-related deaths. That makes weekend nights more dangerous. More fatal crashes take place on Friday and Saturday nights than at any other time in the week.
Effective measures to minimize these after-dark dangers can be taken by preparing your car and following special guidelines while you drive:
•Prepare your car for night driving.
•Clean headlights, taillights, signal lights and windows once a week, more often if necessary.
•Aim your headlights properly.
•Misaimed headlights blind other drivers and reduce your ability to see the road. 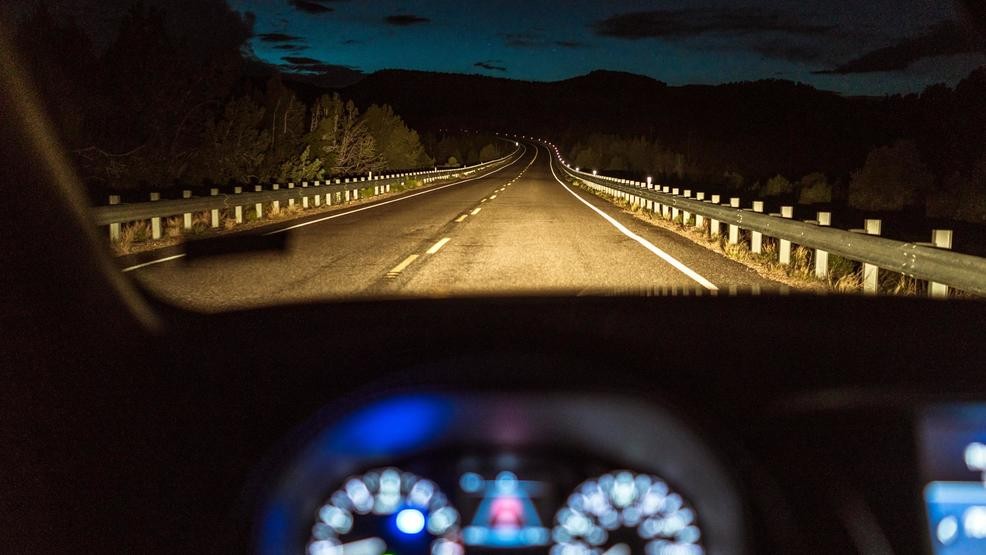 Don’t drink and drive. Not only does alcohol severely impair your driving ability, but it also acts as a depressant. Just one drink can induce fatigue. Avoid smoking when you drive. Smoke’s nicotine and carbon monoxide hamper night vision. Turn your headlights on if there are any doubts. Lights will not help you see better in early twilight, but they’ll make it easier for other drivers to see you. Being seen is as important as seeing.
Reduce your speed and increase your following distances. It is more difficult to judge other vehicle’s speeds and distances at night.
Don’t overdrive your headlights. You should be able to stop inside the illuminated area. If you’re not, you are creating a blind crash area in front of your vehicle.

Keep your headlights on low beams when following another vehicle so you don’t blind the driver ahead of you.
If an oncoming vehicle doesn’t lower beams from high to low, avoid glare by watching the right edge of the road and using it as a steering guide.
Make frequent stops for light snacks and exercise. If you’re too tired to drive, stop and get rest.
If you have car trouble, pull off the road as far as possible. Warn approaching traffic at once by setting up flares or reflecting triangles near your vehicle and 300 feet behind it. Turn on flashers and the dome light.
Observe night driving safety as soon as the sun goes down. As your eyes are adapting to the constant change in amount of light, twilight is one of the most difficult times to drive