Home / General / When should a drive belt be replaced in your car?

Your engine has a number of mechanical accessories attached to it, including an alternator, water pump, power steering pump and an air conditioner compressor. A drive belt is the part that drives all these accessories. The belt itself is driven by a pulley installed on the engine crankshaft. Most cars have one or two drive belts. When a car has only one drive belt, it might be called a serpentine belt. For example, this Ford engine in the first photo has only one drive or ‘serpentine’ belt. The car in the next photo has two drive belts. 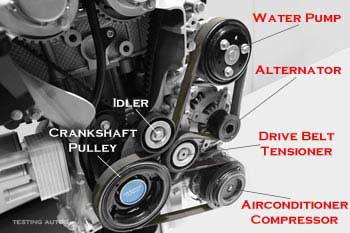 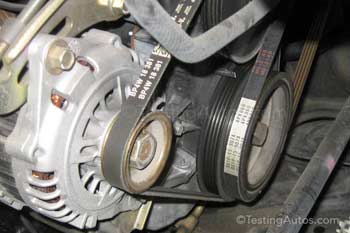 drive belt is made of long-lasting rubber-based material; it’s usually flat on one side and ribbed on the opposite side. A new drive belt should last from 40,000 to 70,000 miles, however, over time it wears and becomes noisy; compare old and new drive belt. Water, road dirt, excessive heat and oil leaks can cause the belt to wear faster. For example, if the protective shield underneath the engine (engine undercover) is damaged or broken, the serpentine belt will wear out sooner. Eventually, an extremely-worn serpentine belt will break.

If a drive belt breaks, you won’t be able to drive your car. This is because the engine will overheat if the water pump is not running. Also, if your car has hydraulic power steering, you will lose the steering assist, as the power steering pump will be disabled. In addition, the alternator will stop supplying electric power that is needed to recharge the car battery and run the vehicle electric systems.

When should the drive belt be replaced? Most car manufacturers don’t specify the exact mileage, but recommend having the belt inspected during your regular maintenance visits. How can you tell if the drive belt needs a replacement? 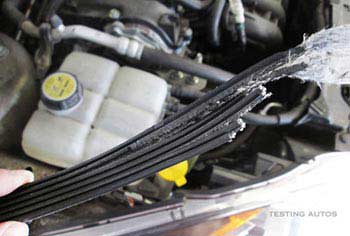 Your mechanic will look for cuts, cracks, missing chunks and other signs of wear; usually, it’s fairly easy to see if the belt is worn out. For example, the belt in the first photo shows cracks; in the second photo, you can see cracks and missing chunks of the tread material on the ribbed side.

The belt may also need to be replaced if it makes chirping or squeaking noises or if it’s stretched.

Another common reason to replace a drive belt is when it’s soaked in oil. Oil damages the rubber material. If your mechanic has found that a drive belt is saturated in oil, he or she may recommend repairing the oil leak first. This is because if you install a new belt and the oil leaks onto it, the belt will not last long.