Home / General / Why Does Your Car’s Oil Light Come On?
Any time the oil light goes on, it’s cause for concern. Many newer and high-­feature cars have oil-life monitors that determine when the oil needs to be changed, but the glowing red oil light in your Cavalier indicates the oil pressure is low. That’s bad for several reasons. Low pressure means there either isn’t enough oil in the system or the oil pump isn’t circulating enough oil to keep the critical bearing and friction surfaces lubricated. If the light comes on while at speed, do your best to pull off the road quickly, turn the engine off, and investigate the problem to avoid damage.

Oil is the lifeblood of any engine, but the oil circuit is probably the least appreciated engine system. The oil-supply path starts in the oil pan, where a pump sucks up the lubricating fluid and distributes it to passages cast into the block. From there oil is directed to the crankshaft bearings, the camshaft bearings, the valve shafts, and ­other important moving parts. Modern oil formulations include detergents, so regular oil and filter changes at intervals recommended in the owner’s manual generally keep the system happy. Unfortunately, everything wears over time, which increases the tiny gaps between sliding parts. Those alone can cause a slight drop in oil pressure, as can an aging pump. 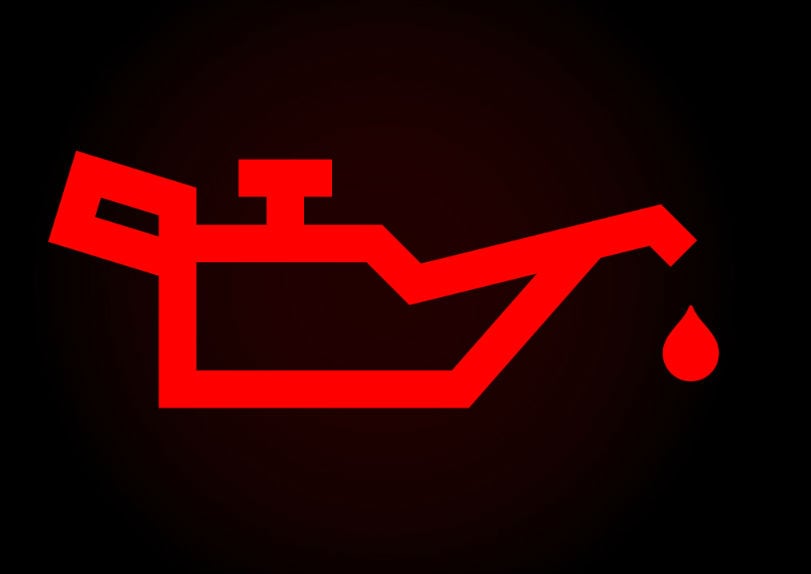 Before you go too far in diagnosing the problem, it probably makes sense to double-­check the oil level and top it off to make sure that isn’t the problem. Since the light comes on at low engine speeds and then shuts off, the oil pump is probably fine; if the pump were dying, you’d see low pressure at high engine speeds as well. The most likely culprit is the sensor that operates the light. The sensor is screwed into the engine and has a probe that resides in an oil passage. It’s basically an on/off switch that uses the oil pressure to close an electrical circuit. Sometimes a particle of dirt or some other foreign matter gets into the probe and fouls the part. The sensor is fairly easy to replace—as long as you can get at it, which is ­sometimes difficult. Unhook the wiring, loosen with a wrench, and follow the instructions to replace the sensor. Take the car for a test drive and see if the light still goes on at idle. If it does, you might be due for a new oil pump after all.